Hi Coven! Today it’s our stop for the Passport by Sophia Glock tour! Do check out the tour schedule below if you want to read more about this young adult graphic novel! 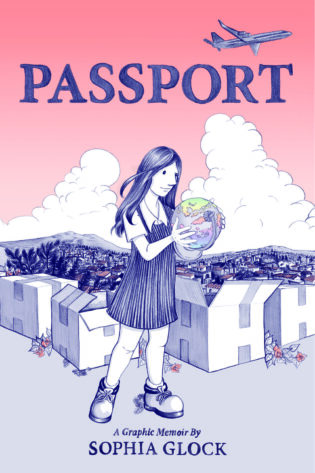 An unforgettable graphic memoir by debut talent Sophia Glock reveals her discovery as a teenager that her parents are agents working for the CIA
Young Sophia has lived in so many different countries, she can barely keep count. Stationed now with her family in Central America because of her parents’ work, Sophia feels displaced as an American living abroad, when she has hardly spent any of her life in America.
Everything changes when she reads a letter she was never meant to see and uncovers her parents’ secret. They are not who they say they are. They are working for the CIA. As Sophia tries to make sense of this news, and the web of lies surrounding her, she begins to question everything. The impact that this has on Sophia’s emerging sense of self and understanding of the world makes for a page-turning exploration of lies and double lives.
In the hands of this extraordinary graphic storyteller, this astonishing true story bursts to life.

Sophia Glock is a cartoonist who lives in Austin, TX. Her graphic memoir, Passport, is on sale 11/2/2021 from Little Brown Young Readers. It is available for pre-order here.

Sophia’s comics and cartoons have been published in The New Yorker, Buzzfeed, Narratively, MUTHA Magazine, and Time Out New York. Her work has also been featured in various anthologies including, Ink Brick, Suspect Device, Quarter Moon, DIGESTATE, Rabid Rabbit, and Kilgore Quarterly. Her collection of comics Born, Not Raised was selected to be included in The Society of Illustrators Cartoon and Comics Art Annual 2016 and her short comic The Secrets in My Mother’s Nightstand was shortlisted for The Cartoonist Studio Prize for Best Web Comic of the Year in 2016.

In 2008 she was a recipient of a Xeric Foundation Grant for her comic, The Deformitory. She is also the author of The Lettuce Girl, SemiSolid, Over Ripe and Passport: Fig. You can pick up her mini comics at indie-friendly stores across the country, or from Bird Cage Bottom Books.